Home » Blog » The Treatment of Burns and Scalds

Home remedies and herbalists were still relied upon in some households during the Victorian period for the treatment of burns and scalds.  A popular home-remedy for the treatment of burns, recommended in Cassell’s Household Guide for example, was to cover the affected area with flour and then wrap it up in cotton wadding,[1] although the coroners’ inquests reveal a range of treatments utilised by the working-class community. 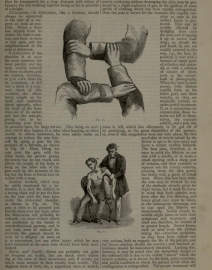 In December 1875, Annie Meadow, age three years, upset a kettle of hot water and was badly scalded.  Instead of immediately calling for medical assistance, her mother, the inquest records, ‘applied some yeast to the injured part, and also some scraped potatoe, and she called in the assistance of a neighbour, and the scald was damped with snowy water’.  The mother then went to the local herbalist who provided her with ‘some ointment’, ‘as well as a mixture to keep the child’s mouth moist’.  Several days after the fateful incident, with the child’s health deteriorating, the mother was advised by the herbalist to seek professional medical aid.  However, the child died before medical aid arrived.  At the inquest a post-mortem examination was held to determine whether the child would have lived if proper medical assistance had been immediately called for.  The surgeon stated that the wounds had become gangrenous and ‘the injuries were not in themselves such as would necessarily have led to fatal results, and in all probability they would have yielded to proper medical treatment’.  Nevertheless, even though the coroner believed the mother and the herbalist ‘guilty of great neglect’, there was insufficient medical evidence for a charge of neglect to be sustained.  All the coroner could do was simply warn the mother and the herbalist ‘to be more careful in future’, for ‘on a future occasion they might have to answer for such neglect to another jury’.[2]

To the horror of the coroner’s court and the local press, even superstition still played a role in the treatment of burns.  In an article with the tagline, ‘Folly and Superstition’, the Ipswich Journal reported on a coroner’s inquest held by the Liberty of St. Etheldreda’s coroner, Mr Wood, in Woodbridge on the body of William Catchpole, ‘aged two years and a half, the only child of John Catchpole, labourer, who lives rather more than a mile from the town’.  At the unusually long inquest, it was established that on the 10th November 1851, ‘Mrs Catchpole was gone to an adjoining cottage with some bread to be baked ([and] although not absent more than two minutes) the clothes of the child caught fire, and he ran to the door, which increased the flames, and in attempting to put out the fire himself, burnt both his hands very much’.  His mother, ‘with the assistance of a neighbour… stripped the burning clothes from the child’.

However, rather than calling for professional medical assistance, which the coroners’ records suggest was becoming more commonplace in poorer communities for the treatment of burns and scalds, ‘a consultation was held by [what the newspaper states] a house full of old women as to what was to be done.’  Their decision was that William would be taken to Framlingham, some eleven miles away, ‘to a Mr John Oakley there, who was to charm away the fire’.  The 1851 census records John Oakley to be a 74 year old man and a ‘Proprietor of Houses’.  The newspaper reported that Mr Oakley: ‘rubbed the child with some of his own spittle, muttering at the same time some cabalistic words… and told the mother “to do nothing to the child.”  The following morning early, Mr Oakely went on his own accord to see the child again, because he thought he had not “done enough” and then repeated his charm’.

William, however, showed no signs of recovery and the local Rector then intervened, suggesting that the mother take him to see Mr Wilson, the local surgeon.  The surgeon attended William daily, but ‘lockjaw came on about the 18th, and death put an end to his suffering on the 24th’ – 14 days after the fatal incident.  The coroner’s inquest, as in the previous case, were not able to established ‘whether the life of this child could have been saved’ had professional medical attention been sought sooner, but admonished the ‘folly and superstition of [both] his mother and her neighbours’.

Mr Oakley, unsurprisingly, was also summoned to give evidence at the inquest.  The Ipswich Journal records that ‘he was examined at great length, but persisted in his power of being able to charm away fire from persons who have been burnt, and he did not appear to be abashed by the ridicule of the Jury’.  The coroner’s court and the newspaper concluded: ‘It is a lamentable fact the (in the middle of the nineteenth century) many poorer people in that parish are still superstitious enough to believe in the power of this man’s charms’.[3]

[1] Cassell’s Household Guide. Being a Complete Encyclopaedia of Domestic and Social Economy, and forming a guide to every department of practical life, vol. IV (London, 1869-71), pp. 73-74.

Please do not reproduce the content of this blog in print or any other media without permission of the author.

One thought on “The Treatment of Burns and Scalds”

Writing about my research

If Those Walls Could Talk

Hidden histories beyond bricks and mortar

Forged by fire: burns injury and identity in britain, c.1800-2000
Past Sense Project

Material Histories of Violence in the Home

The History of Parliament

Blogging on parliament, politics and people, from the History of Parliament

Sniffing out social history in the Eighteenth Century

on the everyday, the banal and other important matters

All things cultural, historic and of general interest

Historian and geographer, writer and researcher

Did the professions form a distinct self-sustaining social group with its own mores and values?